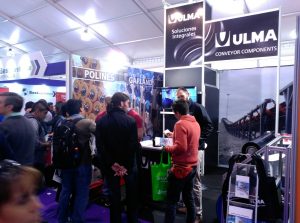 Chile is a strategic country for ULMA Conveyor Components under its internationalisation process, due the enormous potential of its mining industry. Chilean mining represents about 13 percent of the Country’s Gross Domestic Product. Which is why in 2014 we created our first commercial subsidiary in Santiago de Chile.

The fair was attended by 1,300 exhibitors from 35 countries, 7,000 represented brands and about 80,000 visitors. According to the data, EXPOMIN is considered to be one of the most important minerals fairs in the world today, a compulsory attendance therefore for ULMA Conveyor Components which wanted to be present to exhibit its mineral-focussed product offerings and new engineering developments The products exhibited were:

The fair was attended by the entire ULMA Conveyor Components commercial team and was very highly rated, both on account of the quality of the visits received and the business opportunities presented.

ULMA Conveyor Components is to maintain its commitment to Chile as a key country for its international development, with over 50 years’ experience in the sector.